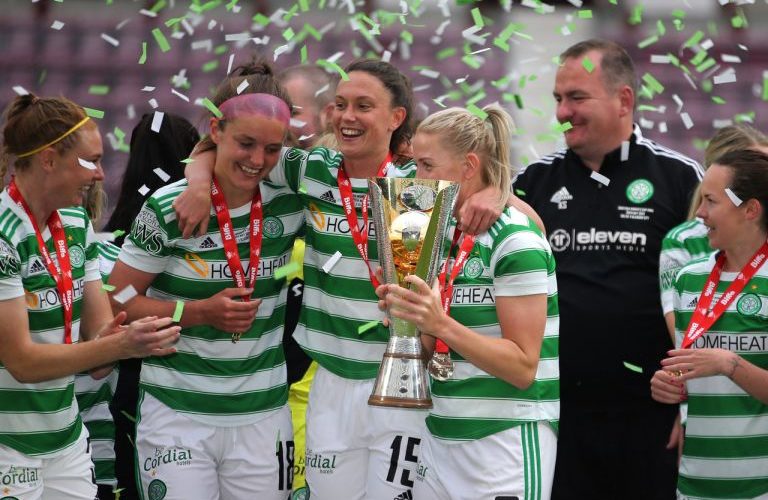 Celtic FC Women’s 2021/22 season ended on a historic high with Izzy Atkinson’s late winner against Glasgow City securing a famous cup double. Whilst the memories of that success remain fresh, with two weeks to go until the start of the new season, not only are Celtic now without the talent of the Irish forward who secured a move to WSL side West Ham, but have also lost at least six other squad players including regular starters from that successful campaign.

One notable absence will be Cheyenne Shorts who was an integral part of the back line during the 2021/22 season and, with promising young defender Chloe Warrington making the move to Glasgow City, the depth of the defence is a real concern. Other departures include young and much improved midfielder Tyler Toland, Icelandic winger Maria Olafsdottir Gros, defender Annie Timoney and Rebecca McAllister who had been on loan to Hearts last season and has made that move permanent.

On a more positive note, the return of loanee Lisa Robertson from Birmingham City is a huge boost. She was one of Celtic’s first signings in 2020 and proved invaluable to the success of the squad in their first professional season. She brings back to the squad a huge amount of experience as well as the talent that made her a stand out player as part of the original professional squad. There have also been two new signings; Amy Gallacher comes with a great goal scoring record from fourth place SWPL side Hibs and forward Lucy Ashworth-Clifford is another player Fran Alonso has brought in from the Lewes stable, having previously signed Caitlin Hayes and Annie Timoney from the English Championship side. Both looked impressive against Rangers on Sunday despite the game ending in defeat.

We know that transfer windows in the women’s game, especially in Scotland where the professional league set up is still in it’s infancy, are always going to be tricky for clubs and fans to navigate. Contracts are much shorter and also more likely to be mutually terminated as players and clubs make decisions in an environment where considerably less money is involved and personal considerations more easily outweigh the ability of a club to compensate players. For Celtic this transfer window felt like a significant opportunity to build on the growing success of the club under Alonso and to signal to fans and those involved with the squad that the club as whole are taking the growth of women’s football seriously. From the outside looking in, it’s easy to feel that is not the case.

Whilst arch rivals across the city Rangers and Glasgow City have also lost key players from their squads, they have also made many more impressive looking signings, including Polish, Mexican and New Zealand internationals. The other clubs have also confirmed the contract extensions of important players with the likes of Nicola Docherty, Sam Kerr and Lizzie Arnot in particular continuing to provide a core of talented and physical squad players with vastly more international experience for the current league champions.

Celtic have confirmed that leaders within the team Kelly Clark, Caitlin Hayes and Chloe Craig are all staying on, as well as last seasons player of the year Jacynta Galabadaarachchi. Clarissa Larisey and Shen will also remain with the former having been hugely impressive already in preseason, recently scoring five goals against Partick Thistle in a warm-up friendly.

However, question marks still remain over other key members of the squad including Sarah Harkes, Jodie Bartle, Liv Chance and, of course, last seasons top league goalscorer with 40 goals, Charlie Wellings who has been linked with teams in Serie A. None of these players were present at the training camp in Gran Canaria with many of the faces appearing in training footage from Spain being unfamiliar and much younger academy players who have been training with the first team.

We have seen glimpses of impressive talent and potential on show last season from academy graduates such as Abby Ferguson who impressed on a couple of occasions coming on as a substitute, notably in the fixture at Celtic Park. A number of the younger squad players also showed promise coming on against Rangers in the City of Glasgow Cup this weekend, which ended in a 2-1 defeat for the Hoops.

Whilst developing these younger players into first team regulars should be supported and is integral as a key objective of the club as a whole, the idea that next season Alonso could rely on a core of players to compete with such limited experience in the SWPL could be a concern. It is of course worth remembering it is still pre-season and the transfer window remains open. Indeed we have been told there will be further signings and possible contract extensions in the coming days but, for fans, the levels of uncertainty surrounding the squad this summer has been unsettling.

While football fans are accustomed to the unique emotions that a transfer window can bring, it feels like the lack of communication from the club throughout June and July has left supporters concerned about how the squad will shape up in the newly revamped league next season. It leaves big questions to be answered about how Celtic will compete in a women’s football environment that is developing at an incredible pace as attested to by the huge audiences being seen for women’s UEFA competitions, the 2022 Euros as well as looking forward to the World Cup in 2023 which looks set to draw further record breaking audiences.

Are Celtic, as the biggest club in Scotland, grasping the spirit of that moment to ensure that the club and the game here is not left behind? It is imperative that we see visible signs of investment and resources being directed towards the women’s team if the club is going to continue to improve and sustain levels of success in Scotland and further afield. Hopefully the coming days will prove significant in demonstrating the club’s commitment and ambition. It is what the women’s game and everyone who works so hard within it deserves.