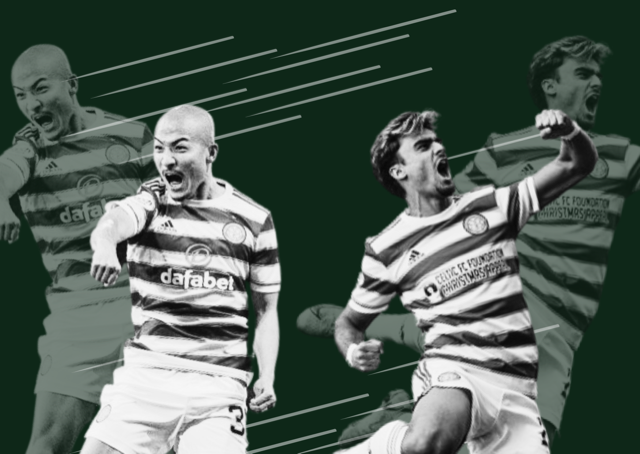 Ever since Kyogo Furuhashi came back to fitness in the spring and reclaimed the central striker role in Ange Postecouglou’s title-winning side, the starting choices for the two wide forward positions have also been cemented, with Daizen Maeda and Jota starting seven of Celtic’s last eight competitive games – both starting on the bench for the final league match of 2021/22 away to Dundee United.

They are two very different types of wingers, with Maeda’s aggressive intensity and directness seen as clearly in the numbers as Jota’s love of the ball, sublime technique and calculated creativity.

Maeda topped Celtic’s pressing charts last season, making 23.3 per 90 (p90), with Jota at 11.8, and Maeda also topped the counter-pressers (pressure within 5 seconds of a turnover), posting 2.5 more than Jota p90. The Japanese has also made around double the number of interceptions and possession wins compared to Jota.

In possession, the contrast was just as stark, just in reverse. Jota is attempting 49 passes p90 compared to Maeda’s 32 (when playing as a winger), and unsurprisingly the Portuguese attempted almost three times as many dribbles, 6.6 to 2.6, completing 57% to Maeda’s 32%. Through this possession Jota created 2.3 chances p90, more than double that of Maeda’s 1.1.

Jota and Maeda are two talented wingers, but in very different ways. This variety in intentions and instincts are perhaps seen most clearly in where they take their attempts at goal from.

Daizen Maeda’s shot map in Japanese football was truly extraordinary for a winger, with most of his shots coming from very central positions inside the penalty box. It’s a trend that’s continued at Celtic, where almost all his attempts – even playing as a winger – are in the middle part of the penalty box, commonly referred to in stats parlance as the ‘Danger Zone’.

Maeda has scored roughly a goal every three full games he’s played as a winger for Celtic, his xG raising to 0.45 p90 in this position. Any striker would be very pleased with an average xG-per-shot of 0.25, meaning on average the quality of chances Maeda has got to results in a goal every fourth attempt. For a winger, such a high xG per shot is almost unheard of.

One situation against Ross County in April typifies Maeda’s desire to get into the best possible position in front of goal when there is an attack developing on the other side of the pitch. As Celtic break down the right-hand side, Maeda is on the far side of the centre-circle, far below Kyogo.

Arriving at the edge of the box, Maeda looks set to run for the back post, behind Ross County’s left-back.

Instead, with a very quick change of direction, he instead heads towards the middle of the goal.

As Jota’s cross comes in, Maeda gets in front of his marker to get a shot on goal from a very good position, which is saved by County goalkeeper Ross Laidlaw.

Arriving in the box centrally to meet crosses is such a valuable part of Maeda’s game and even beyond his shot map there’s clear evidence of how effective he is at it. When playing as a winger, Maeda has been on the end of 2.5 open play crosses p90, the vast majority of them in very good areas centrally in opposition’s penalty box.

This is twice as many times p90 as Jota and it’s also a nice illustration of the division of labour between the two wingers with 11 of the crosses Maeda received being from his counterpart Jota.

When it comes to finishing, Jota is much more of a high-volume shooter, with 50% more attempts than Maeda p90, with the average probability of his attempts being scored (xG/shot) half of Maeda’s.

Jota’s ability to cut-in from the left is also seen in his shot locations, with a cluster of shots in the left half-space, both outside the box, as below in the derby win at Ibrox.

…and inside the box away to Hearts, where he goes on the outside of the defender to finish on his left foot.

Jota and Maeda’s finishing output has been remarkably similar so far. Jota’s 0.42 goals p90 is followed closely by Maedas’s 0.32 (when playing as winger), with the xG slightly in the Japanese’s favour (0.45 to 0.35). Overall, these are both very good and sustainable numbers, even if they are achieved through very different means.

While both are predominantly right footed, Maeda and Jota’s different instincts when it comes to which areas of the pitch to attack can also been seen in their crossing positions and volume.

Just as with his shooting locations, Jota is happy to drift inwards from the left and send in crosses from above the 18 yard line, with 27 crosses (15% of total) being sent in from these deeper locations.

A very similar situation for both wingers against St. Johnstone at home last season show how the two wingers often prefer very different solutions. They both receive the ball out on the left in the exact same position. Maeda has a defender close to him, while Jota has slightly more space, especially down the line with the St. Johnstone defenders much more central.

Maeda chooses to go past his marker towards the touchline, beating him for pace and delivering a cross across the penalty box. But Jota, even with more space to attack the touchline, instead let’s the closest St. Johnstone defender runs past him, as he instead cuts in on his right foot to deliver the cross from deeper.

Maeda much prefers to attack down the towards the touchline, and very often makes a more inverted run, aggressively attacking the ‘half-space’ area between the defending full-back and centre-back. It was seen to its full effect for Celtic’s opening goal versus Kilmarnock, where he makes the run on the outside of Kilmarnock’s widest player and into the space between him and the centre-back.

It was a movement pattern seen throughout Maeda’s games as a winger last season as well, including in these situations against Ross County and Motherwell at home last season. Both led to Maeda providing crosses across the box from these more central and higher areas.

The discussion around which side Jota is most effective at as a winger has been present ever since he returned to the team from injury after Christmas and Daizen Maeda arrived from Yokohama Marinos, but is it even a debate that needs ‘settled’?

Through both their frequent changes of sides in games, but also through how their skillset and instincts are so different, there is a huge flexibility when it comes to how to combine these two right footed wingers to achieve what is best for the team.

This interconnection of opposite forces and skills means that not only do Daizen Maeda and Jota complement each other, they also elevate the effectiveness of Ange Postecoglou’s system to a higher level. The yin and yang of Celtic wingers combining to make the team whole.